Here you can find current information about us.

For nearly 30 years, BZL Kommunikation und Projektsteuerung GmbH (BZL GmbH) has been providing scientific advice and support to politicians and administrations, associations and companies as well as civil society organisations. More on our pages

BZL GmbH was founded in 1994 by Dr. rer. nat. Barbara Zeschmar-Lahl, who has been managing the company ever since. For larger projects, we can draw on a network of competent colleagues. 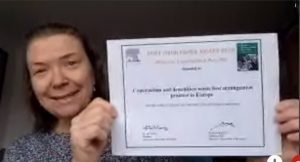 Barbara studied biology at the University of Bremen (diploma 1984) and in 2003 received her doctorate at the Technical University of Berlin in Faculty III – Process Sciences on a waste-specific topic. After many years of freelance work and several teaching assignments at the Universities of Bielefeld and Oldenburg as well as authorized representative of a research institute and branch manager of an engineering office, she founded BZL Kommunikation und Projektsteuerung GmbH in 1994, based in Oyten near Bremen.

Barbara is an auditor for the field of recycling at the Environmental Assessment Committee (UGA) in accordance with Section 21 para. 1 No. 2 UAG of the German Federal Ministry for the Environment.

Since 1995, the Committee for Biological Agents (ABAS) has been advising the Federal Ministry of Labour and Social Affairs (BMAS) on questions of occupational safety and health in activities involving biological agents (microorganisms in the broadest sense). The legal basis for this is § 19 of the Biological Agents Ordinance. Since 2002, Barbara has represented the Bank of Trade Unions (ver.di) in the ABAS Subcommittee 2 “Protective Measures” as well as in the later established UA2 working groups on waste management and risk communication. After leaving UA2 at the end of 2022, she continues to be active for the trade unions as an expert in the working group on waste management.

Since 2005, Barbara has been editor of the Müll-Handbuch, the standard work of German waste management (Erich Schmidt Verlag, Berlin).

From October 2009 to September 2010, Barbara was a member of the Committee for the Development of VDI Directive 3925 – Tools for the Evaluation of Waste Treatment Procedures.

From October 2004 to December 2009, Barbara was a member of the Supervisory Board of the Berlin City Cleaning Companies (BSR), an institution governed by public law (AöR), appointed by the guarantor meeting.

From 2002 to 2009, Barbara was a representative of the environmental associations in the Working Committee for Secondary Fuels (NA 062-05-83 AA) at the DIN Standards Committee Material Testing (NA 062) and was its national delegate in Working Group 3 (“Sampling, sample reduction and supplementary test methods”) of CEN/TC 343 – Solid Recovered Fuels.

From 1997 to 1999, Barbara was a member of the expert commission “Plastics industry in Lower Saxony on the model of sustainable development” convened by the Lower Saxony Ministry of the Environment, where she represented the Bank der NGOs (here: Naturschutzbund Deutschland (NABU)).

After his training and professional activity as a chemical laboratory technician, Uwe studied German language and literature, education and social sciences, and chemistry (teaching profession, secondary level II) at the University of Bremen (1st state examination), where he received his doctorate in 1982 for a thesis on an environmental chemistry topic.

After working as a research assistant for the first Green parliamentary group in the Bundestag, Uwe served as Head of Department for the environment and health of the city of Bielefeld from 1986 to 1991.

From 1992 to 1994 he was State Councillor (deputy minister) and Permanent Representative of the Senator for Environment and Urban Development of the State of Bremen.

From 1995 to 2000, Uwe was managing director of BZL Kommunikation und Projektsteuerung GmbH. During this period, he started his habilitation at the Technical University of Darmstadt (Habilitation thesis 2001 (in German), habilitation 2003) and served there as a private lecturer.

In 2001, Uwe moved back into administration. From 2001 to 2009, he was Ministerial Director and Head of the Department IG – Environment and Health, Immission Control, Plant Safety and Transport, Chemistry – at the Federal Ministry for the Environment, Nature Conservation and Nuclear Safety. In addition, he continued his teaching activities, from 2008 as an adjunct professor at the Technical University of Darmstadt with a teaching license for immission control and waste management.

After leaving the BMU at the end of 2009, Uwe again served as managing director of BZL Kommunikation und Projektsteuerung GmbH until 2014. He not only continued his teaching activities at TU Darmstadt, but was also involved in the establishment of a master’s program in environmental engineering at the University of Indonesia (Jakarta) from 2010 to 2017. In 2011, he was appointed associate professor by the UI.

In July 2022, Uwe returned to BZL Kommunikation und Projektsteuerung GmbH, where he works as senior expert, responsible in particular for projects in the field of innovative fuels and the chemical recycling of post-consumer plastic waste. He also continues his teaching activities at the TU Darmstadt.